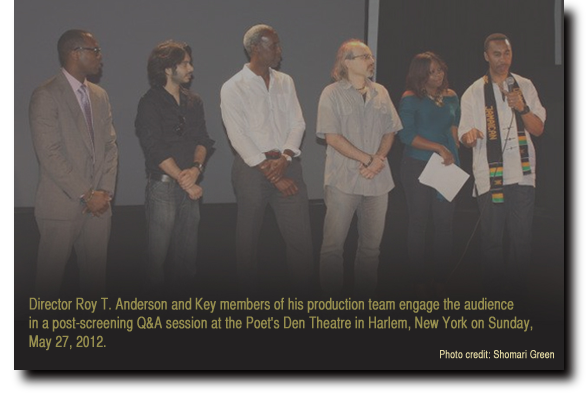 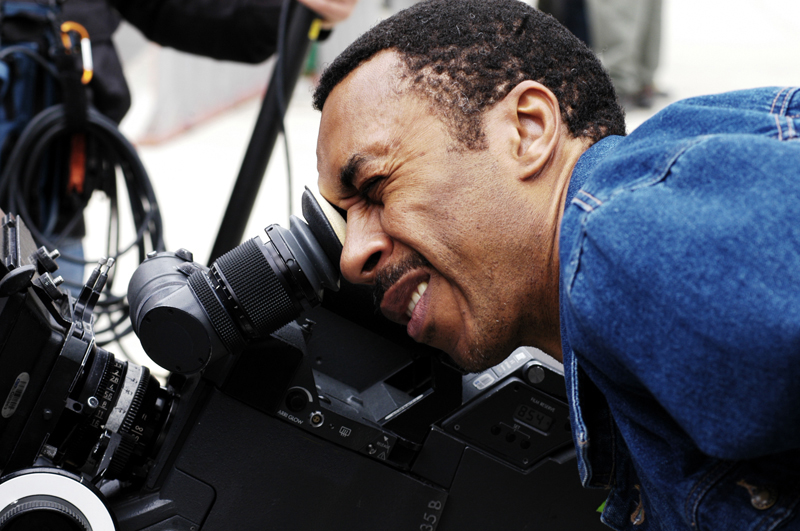 ROY T. ANDERSON is writer, director and producer of his first feature-length documentary Akwantu: the Journey. A veteran stuntman/stunt coordinator, Anderson is a world record holder and an award winning stuntman. For more than twenty-five years he has performed stunts for such Hollywood stars as Will Smith, Denzel Washington and Jamie Foxx, accumulating more than 400 production credits in the process. He's worked on such hits as "Men in Black 3," "The Dark Knight Rises," "Spiderman 2," "Bourne Ultimatum," "American Gangster," and top-rated TV shows; "Law & Order," and "Sopranos." While continuing his stunt work, Anderson has flipped the script to direct his first film. During his storied career Roy has shown the ability to be very creative in his performance and coordination of difficult stunts, and he brings this same imagination to the table as a first time director who has observed some of the best filmmakers in the world.

Edward is an actor and producer working on his first documentary feature film. As an actor Edward has performed in productions off-Broadway and regionally, in plays such as August Wilson's Joe Turner's Come and Gone and Shakespearean productions like Titus Andronicus. In between those performances Edward decided to put his energies into producing which has resulted in two short films. This experience gave him the necessary skills and keen awareness that has helped him to balance the art of filmmaking and the business side of production. Akwantu: the Journey has been a significant boost to those attribute. "This film has given me a new found respect for the documentary process. We were able to take this production to new heights by focusing on the true film making process from production to post to marketing and distribution" says Washington. "Just because you are not producing a studio film doesn't mean you sacrifice excellence."

My grand father is from Jamaica but he never really talked about his experiences there. So when Roy approached me to edit his film I jumped at the chance to work on my first feature. I was excited too because of the opportunity to learn more about Jamaica and the Maroons," say Harlem-born Mike Alston-Nero. "It was an incredible experience." The love for the arts started back in high school where he partnered with childhood friend Mark Caboroy shooting movies on Super 8 for their filmmaking class. They have since collaborated on several short films, including the 2010 award-winning festival favorite Blindsided.

Rolando is a composer, producer, singer-songwriter and sound designer. He studied piano at the Royal Conservatory of Music in Toronto, and continued to deepen his studies at Concordia University in Montreal where he received his BFA in Music Theory and Composition with honors. One of Rolando's passions is writing program music, which has led him to write music for theater, dance, and more recently, television and film music. He has composed original music for five documentaries, several independent shorts and several TV commercials. Rolando is also the co-founder (along with his wife, Heidi Siegell) of Musa212, a creative enterprise which specializes in music and sound production. While Rolando and Heidi's focus is primarily in all things musical, Musa212's mission is to build or be a part of an artistic community where art can be created and shared in a supportive environment.

Adisa S. Oji is the younger brother of the film's director, Roy T. Anderson, and a graduate of the University of Toronto. The love for documenting the daily lives of African around the world has turned this young man into a very curious modern nomad who shares his time living in North America, the Caribbean and Africa in an effort to accomplish his life's mission. In 1987 he founded Mother Africa's Children Photographic Reproductions International (MACPRI) for that stated purpose. The images taken over the last 25 years by Oji have become priceless collectables. MACPRI celebrated its Silver Anniversary recently with a photo exhibition at the Jamaica 50th Film Showcase in Toronto, held at the prestigious TIFF Bell Lightbox where Akwantu: the Journey had its Canadian premiere. Oji's iconic photos were also on exhibition at Akwantu's world premiere in Charles Town, Jamaica, June 2012. Oji's many images throughout the film have certainly added to Akwantu's cinematic palate.

Dario has been a film editor for over 19 years. He got his start at Crosswalks Television channel (NYCTV) in NYC. As editor, Dario grew with Crosswalks where his talent in both editing and management afforded him the title of Post Production Manager and Senior Editor. His management and editing skills were later put to the test at the Ad Agency of N.W. Ayer & Partners. He was specifically hired to revitalize their underutilized A/V Department. Freelance editing soon took center stage for Dario and has since remained the main source of his creative work to date. He got his freelance start at AMC editing their movie promos, which led to steady work with Bravo and IFC. In the documentary series for Vara Television Holland, he cut a total of 36 half hour documentaries. Kika NY and Kika USA were two seasons of a "run and gun" sub-culture documentary series. This project not only provided a creative challenge but it was very much an unexpected learning experience for him. Kika NY was nominated for best youth series (Holland's Emmy equivalent). For the past 3 years Dario has also been honing his Colorist skills. Several spots, shorts and a feature film are under his belt. Bigi is currently on staff as a full time editor at MindSmack post house in New York City.

Matt began his design career as an Information Technology Assistant at Rutgers University in 1995, where he helped develop the web presence for Campus Information Services and served as the student representative to the University Webmaster Committee. Since then, he has done both freelance and full-time design and development for organizations ranging from small businesses to Fortune 500 corporations. He has extensive graphic design experience in web and print, and is fluent with Photoshop, Illustrator, and Flash.

Vineet is an independent filmmaker and animator with more than 12 years of international experience in 2D and 3D animation. His animated characters have come to life in cartoon series like Word World, which is broadcast on PBS Kids and Alpha and Omega, produced by Lionsgate and Crest Animation Productions, and in many other U.S. and international animation films. An artist at heart, Vineet believes in experimenting with different forms and mediums to express his stories, which lead him to move steadily from 2D classical animation to 3D animation and now to live action filmmaking. He has written, directed and edited numerous TV commercials, music videos, feature and shorts films, such as "Colors" and "Just Like Us," both of which were as official selections in the Big Apple Film Festival in 2010 and 2011.

Colonel Lumsden has been the leader of Charles Town, a historic Maroon community on the northeast coast of Jamaica since 2005. He attended Southern Illinois University on an athletics scholarship. After graduating from SIU in 1970 with a Bachelor of Science degree in Business Management, he entered the world of finance working for such companies as Oppenheimer. Then one day, suddenly, Lumsden left the corporate world and turned to his lost love – art. "I could draw…and my ability to draw got better every year even though I wasn't practicing…so I decided to see what I could do with this talent that I had." And he has certainly found success. His work can be found in hospitals and homes and other institutions in the United States, Austria, Germany, and Jamaica. Lumsden contributes original artwork to this film, with his striking depictions of eighteenth century Maroons leaders "Nanny" and "Cudjoe."

Dr. Fuller received his Ph.D. from the International History Department at the London School of Economics in 2010. He is currently an Assistant Professor of History at Georgia State University in Atlanta, GA. Dr. Fuller has also previously taught African and International History courses at Connecticut College, Emmanuel College, Florida International University, and was a Visiting Scholar and Visiting Researcher in the African American Studies Program and African Studies center, respectively, at Boston University. Dr. Fuller's publications include the co-edited book Money in Africa (London: Trustees of the British Museum, 2009), an article in the refereed journal Nations and Nationalism, as well as other print media. He is a consultant on the film Akwantu: the Journey, and is also its Director of Educational Outreach. Professor Fuller has made several presentations on behalf of the film at universities and institutions in the United States. Inspired by the film, professor Fuller has also created at GSU a "Jamaica Study Abroad & Maroon Emersion Program" which he will be leading May 16 to June 2, 2013.